It’s not everyday that you have bare your soul in public and face your biggest fears. Thank god for that. But when those times come, as scary as they are, they have come take you from one place to another. They come to take you from one place in your life to another better place, from one stage of life to a more mature stage of life, from a small version of you to a bigger version of you. I went on one of these journeys very recently when preparing for my Commute Meditation workshop that I gave recently in Sydney.

Why meditation for commute?

The idea of doing a meditation for commuters workshop came into my mind in the very first days of my move to Australia. The universe was bringing me signs that there is a need for it in Sydney. These signs came in the form of meeting a banker at a friend’s BBQ who told me that his commute meditation saves his sanity everyday, sitting next to a lady who visibly started to meditate on the ferry on our way to work and from my personal joy of meditating on my commute to work in the CBD area in Sydney. I loved it so much that I wanted more people to also meditate on their commute. It made or broke my workday in terms of my happiness levels, productivity levels, creativity levels and my patience in dealing with difficult colleagues.

There have been numerous studies to show the benefits of meditation on you, like lowering your stress, regulating your heart and respiratory systems, and this TED talk highlights research evidence as to why and how meditation can increase your creativity.  During the promotion of my Simply Meditation Online course, I researched a lot about the effects of meditation on the brain. What I was fascinated by is how quickly a little meditation can take your brain from Beta to Alpha waves, meaning that it takes you from intensive problem solving and stressed out mode to a calming, resting and inward looking mode.

But I wasn’t interested in teaching all this fancy stuff about meditation. They are just side benefits. My main goal was to give people something constructive to do during their morning commute. My wish was for people to spend that time on themselves instead of  giving it away to randoms on Facebook or to their work emails. My intention was for people to feel lighter as if the weight of their enormous work challenges were lifted up by an invisible helper or assistant or even an invisible friendly boss and they didn’t need to worry. My meditation made me feel like no matter what the work day would throw at me, I had the support from the universe and from my inner strength to handle it, gracefully. I want others to have this too, this lightness that you can achieve with a simple little meditation on your commute to work.

The fears that came up

By chance or by divine intervention, I met the founder of The Manly Hub who cheered me to get the workshop up and deliver it. His enthusiasm was contagious and I said yes. I didn’t think through the logistics, the difficulties or any other hurdle that might be in the way. I innocently and enthusiastically said yes. Then the fear took over.

The first fear was: “No one will show up”, and apparently I was bent on making this a reality. Why? I don’t know, the human mind is twisted sometimes and my ego was running the show. I tried to make this a reality by not telling anyone that I had a venue and time booked to teach a workshop. Then, through another sign from the universe, I met up with my friend Jasmin, the owner of Cre8withJaz, who told me to “Do something that scares me everyday.” So, I decided to have some fliers and posters printed about my workshop and hand them out near the ferry wharf, where all the commuters would be passing by.

I woke up early one day, put on a bright scarf and my bright running shoes, some makeup and a big smile and headed out – all the while my heart threatening to beat out of my chest. I found a spot at the entrance of the wharf and started handing out the fliers. Two out of three people said no thank you and with every no my heart broke. It broke, and broke, and broke, till I felt empty. Somehow I still managed to give away all the fliers, about 300 of them and I gave myself permission to go home, curl up and hide under my sheets. I had just survived one of the most self-imposed scariest, gut wrenching experiences which left me completely drained and emotionally exhausted. This whole experience was too extreme; it was too scary and in fact hurt me more than it helped me progress. I definitely learned how to identify an unhealthy level of fear and avoid it. The fliers didn’t bring me any students at all. This further proves that when the fear is too big and makes you feel sick, it is not aligned to your higher purpose and wont bring your desired results.

The second fear was paralyzing. I had to put up an event page and a sales page for my event online and a part of me knew that this would be how I would actually make sales and get people in the workshop. Another part of me, the ego side of me, tried to make me sabotage myself by not putting up an event page at all. I decided to “out my ego” to on Facebook and was able to overcome this fear. Here’s what I posted after the ordeal was over. Just so you can see how bad it was: 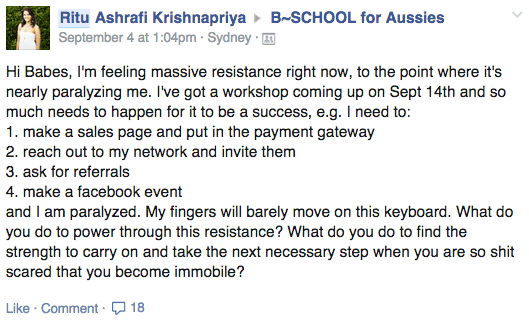 The third fear was in promoting it. I had been in so much resistance and self-sabotage mode, that now I only had 10 days to promote the event and get people to the workshop. I visited Manly Hub and spoke to them about potentially canceling it. Another sign from the universe came when they said, “Sorry, you can cancel it but you still have to pay for it since it is such short notice.” I had no choice but to go ahead with the set date.

At this point, I had given up. I had two people who had paid and booked in and although that was way below what I had hoped for, I accepted it and felt relieved by my own decision to carry on with the workshop. This new fearlessness and courage made me realize that I had nothing to lose! And I started talking about my upcoming workshop with excitement and enthusiasm instead of dread and fear. What do you think happened then? I sold out the workshop!

What I learned about running a workshop from my fears

Looking back, I can see clearly why all those fears came up as I was getting ready to give this workshop. They came up as RESISTANCE. They came up to stop me in my tracks and to set my back years. Why? Because a part of me knew, for certain, that the moment I gave this workshop successfully, I would have arrived at the next stage in my development and in my life as an Atma Kriya Yoga and meditation teacher. This next stage sees me doing bigger things, stepping out of my shell a lot more, having more confidence in what I teach, and making a ripple in the world around me. This confidence comes from my belief in Atma Kriya Yoga, from my trust in my teachers and from my belief in the love that underlies all the meditation that I teach.

I’ll see you on the other end of it. 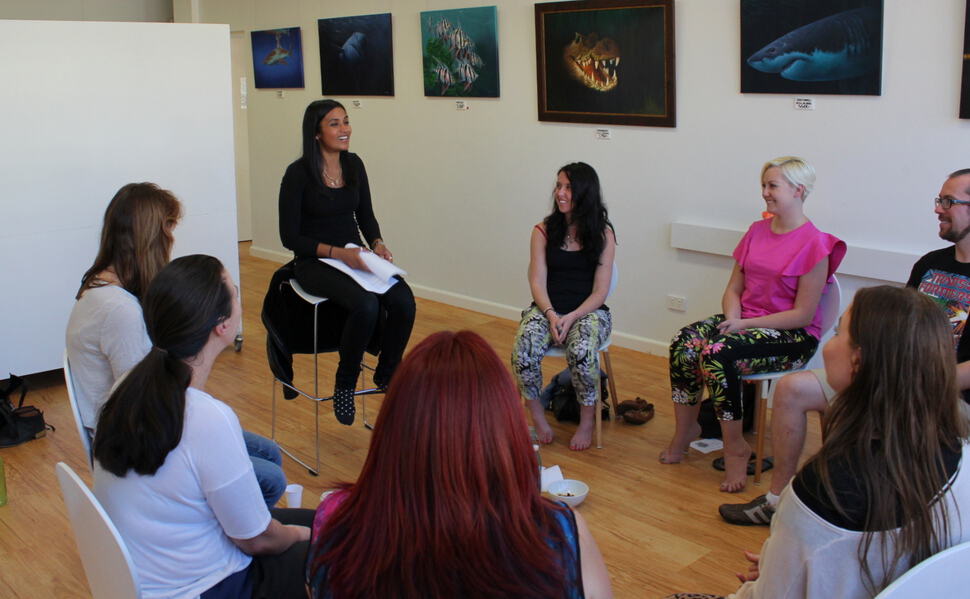